In listening to fallout over Trump’s recent DACA decision, I’m drawn to parallels with Derrick Bell’s Space Traders, a controversial novella published in 1992 that examines what might happen if an alien race offered the US government a wondrous bounty in return for the entirety of the country’s African American population.

I say read it, and decide for yourself. Read it and watch as the world around us seems to follow the script. 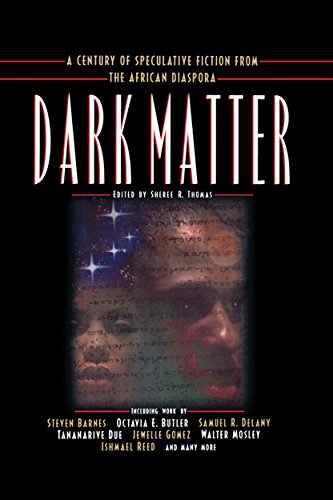 I first read Space Traders somewhere around 2012 when a flurry rose around it due to Obama’s candidacy. It seemed…valuable…I got it, anyway, but in my worldview it wasn’t really relevant to what was going on at the time. It was republished in Dark Matter two years later. My memory was jogged again a year or two ago when I saw a FSI piece Nisi Shawl wrote on the history of African-American Science Fiction. I didn’t re-read Space Traders then, but I recalled it, you know, reintroduced it into a slot in my memory of Interesting Science Fiction that Exists.

Maybe this is why, after listening to recent conversation about DACA, Space Traders came back to me. Maybe this is why I Googled it today and read it again. Maybe this is why I didn’t find the story outlandish this time. Or, well (pun intended?), yes, why I find the the story outlandish, but not for its conceit. The story explores public arguments made for and against accepting the aliens’ deal by politicians, clergy, businesses, other minority groups, and the general voting public. Its parallels to the conversation around DACA are both eerie and unnerving. Reading Space Traders today feels uncomfortably familiar.

At one point, one of the characters defines the problem for resistance as follows:

“The question is to how best to counter an offer that about one third of the voters would support even if the Space Traders offered America nothing at all. Another third may vacillate, but … that in the end … will simply not be able to pass up a good deal.”

Read that passage again. Go on. It’ll only take a moment.

Some time ago I was sharing a dinner table with a well-known African-American writer who I will not name because that’s not my point here. Eventually our conversation touched on race and gender, and partially on things like the Alt-Right Sad/Rabid Puppy wedge that’s the SF field’s contribution to right-wing bullydom. Somewhere in that conversation I said the situation seems so much sharper now than it has ever been. This is when the writer very politely asked why I thought that was true. Not as in “what are the causes of it being sharper?” but as in “how do you measure such sharpness in order to judge it one way or the other?”

To be honest I didn’t have an answer. When I think about it, our rhetoric today is probably not sharper than it’s ever been—and, as divided as we sound now, we’re probably not even close to being as violent right now as we’ve been in the past. This is America, after all. Pretend as we might, our history has been far more bloody than inclusive.

So, yes, my statement at dinner was clumsy. It was clumsy because for me it was correct—the world is sharper for me now, but that’s because I’m seeing the situation in ways I didn’t earlier. Today I focus differently, but I’m not used to that focus so I sometimes have to fight through all my gut reactions in order to let my brain lead me to it. Today I understand that even writing this statement in this blog post is, in its own way, clumsy. Not that I have a choice here, but I’m good with that. I would rather be a clumsy, well-meaning guy who stumbles my way to understanding than a person whose view is based on privilege so strong I’m blind to what it means to be human.

As far as DACA is concerned, I have opinions, of course. But they don’t matter here. I’m not some leading-edge activist. I’m just a 50-some year-old science fiction writer trying to figure out what life means, you know? And I know this post all by itself will never change anyone’s mind. This post is not Good SF, after all.

All I really want is for you to sit down and read Space Traders, then think hard about it. When the narrative makes you angry, I want you to ask yourself why. Compare that passage to arguments happening today. See how they are often so similar you can’t tell them apart.

Space Traders is about much more than DACA, of course, about much more than immigration or even race relations in general. Space Traders is about humans, power, and how we organize and manage that power, how in America that power is clearly in the hands of a culture whose foundation is to staunchly steeped in white supremacy that, even when it’s brought to the surface in its most explicit and impossible to ignore fashion, that third, vacillating part of our population can find ways to pretend it’s not there. It’s about how people use power, how we cloak it in common good, pretend that we are e pluribus unum when is in our interests, but find ways to shove that idea aside when it’s no longer as convenient. It’s about the fundamental nature of people and how the Declaration of Independence and our Constitution are aspirational more than true. It’s about those times when we’re willing to let power brokers stand certain laws of logic on their heads when we benefit from make the Declaration and Constitution bend in different ways.

And, sometimes, for any or all those reasons, we’re just straight out wrong.

The best science fiction helps us think about these things.

That’s why I want you to go read Space Traders today.